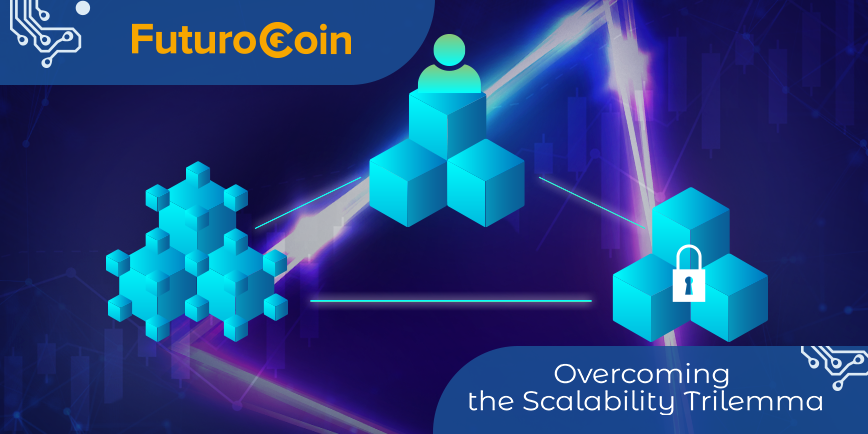 2020 is becoming a promising year for new blockchain platform innovations. The advancement of blockchain cloud services to more significant decentralization efforts is only the beginning. That said, the blockchain community has struggled with solving the Scalability Trilemma from the inception of blockchain. It is precisely this issue that stops blockchain’s mass adoption.

A lot of new ideas and solutions have arisen. This article provides an exploration into how FuturoCoin effectively handles the scalability trilemma.

Scalability Trilemma – What is it?

Blockchain platforms tend to prioritize security to prevent attacks and maintain a confident and safe network. Attacks may come from many angles. So it is only natural for security to be a priority. That said, high levels of security may negatively affect the overall performance. The scalability of the network suffers and, in turn, deters users. Maintaining a high-level of security while effectively allocating resources on a busy network may be troublesome.

Scalability – What is it?

Overall performance ties in with scalability, as it determines the capacity of a network. Balancing scalability and security is thus paramount. From the outset, a high focus on scalability allows for the quick processing of applications and transactions, especially under large volumes.

Without the right balance, security problems may arise, especially when network volume peaks. Costs and security measures, in turn, become challenging to maintain.

Decentralization – What is it?

Philosophically, decentralization is the heart of blockchain technology and also the most troublesome. Decentralization refers to the level of diversification of ownership, value, and influence in the blockchain. Decentralization aims to provide a property similar to redundancy without a single point of control – dispersing power away from a central authority. Truly decentralized networks strive to create a network based on user contribution.

Theoretically, decentralization is a brilliant way of giving the community control over the network without the need of government, the banks, or a regulating body.

FuturoCoin has addressed these issues, providing an additional level of security, besides a masternode locking mechanism. Every input needs at least six confirmations (six mined blocks) to become usable. Being derived from the x-11 algorithm – 11 different hashes also, add to greater security and decentralization. Currently, FuturoCoin can process 133 transactions per second – a lot faster than Bitcoin and Ethereum! Also, FuturoCoin addresses the decentralization arm of the trilemma scalability by operating on the revolutionary Dash-based autonomous system – based on the Sybil proof decentralized model. Unlike Dash, FuturoCoin allows for instant transactions without any additional fees.

Although the scalability trilemma is a consistent issue in the blockchain sphere, FuturoCoin has developed a well-balanced platform. The platform provides excellent security, scalability, and an autonomous decentralized network. The network is fast, safe, providing for instant transactions without hidden fees, unlike many of its competitors. By effectively tackling the scalability trilemma, FuturoCoin has significant room for development and growth in the future.