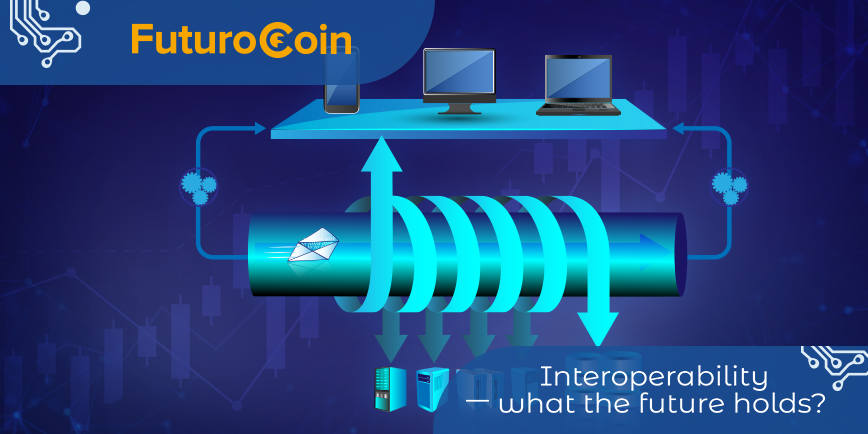 FuturoCoin provides a decentralized blockchain platform capable of adjusting to the omnipresent interoperability and centralized issues. This article analyses the current state of interoperability providing some insight into what awaits in the exciting near future.

2020 marks the 12th year of Blockchain as a peer to peer ledger. Since its inception, blockchain has seen a persistent surge in development on par with technocratic corporate competition. Gartner’s IT Symposium/Xpo 2019 was quick to underline that 90% of current enterprise blockchain platform implementations will require upgrades every 18 months to remain competitive. Along with many pervasive issues, current 2020 trends show interoperability as a key deciding factor of success and mass adoption.

In the world of blockchain, interoperability is the ability to distribute value across blockchain networks with different ecosystems without the need for intermediaries. The aim is to develop a decentralized ecosystem. That said, currently cross-communication between blockchains is troublesome. The majority of blockchain platforms are unable to produce verifiable signatures; hence, a miscommunication persists. Each blockchain platform is developed by a different team of developers which determine its direction, purpose and scope. For example, the two most commonly used blockchain platforms (Bitcoin and Ethereum) are based on different technical languages. These technical dissimilarities include: smart contract functionality, consensus models and transaction schemes.

In an effort to solve interoperability issues, TierNolan created a preliminary solution by inventing atomic swaps in 2013. Since then, atomic swaps have blossomed, providing peer-to-peer trading of two cryptocurrencies without the need for trusted third parties. That said, atomic swaps still suffer from slow transfers. For example, Bitcoin swaps may still take over an hour to finalize. During that time, prices may fluctuate. Additionally, for atomic swaps to work, each respective cryptocurrency must have the same hashing algorithm.

On that note, bodies such as GS1 are in the midst of developing universal communication standards to overcome interoperability shortcomings. IBM and Microsoft among other companies have shown enthusiasm and a willingness to accept these standards for their blockchain applications in the supply chain industry. To add, the Enterprise Ethereum Alliance (“EEA”) has developed a pre-certification sandbox known as EEA TestNet. This sandbox allows for the standardization of ethereum forks to achieve interoperability. By the end of 2020, the EEA plans to have a complete certification program ready for mass adoption.

FuturoCoin has been modeled in decentralized manner, which allows the owner to have full control over the coin without government or banking influence over it. FuturoCoin provides a lot of room for current and future interoperability developments, as its source code is sub-derived from Dash. It uses 11 different hashes for hashing blocks for a more decentralized network.

By 2025, 10% of the World’s GDP will be based on blockchain applications. 28% say the interoperability of systems is key to success. As adoption increases, the push for interoperability becomes more apparent. With standardization bodies such as EEA and GS1 seeking mass adoption of their respective ecosystems. Refreshingly, interoperability will become a lot more common in 2020 and beyond.